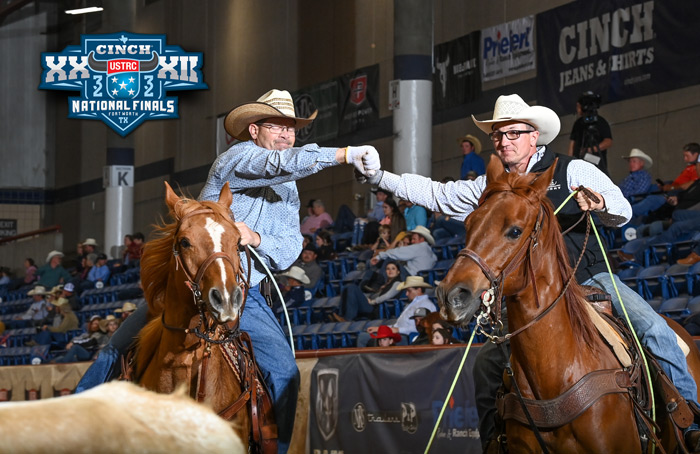 The #9.5 Legends requires ropers to be over 50 years of age, but Carter is a legend in his own right.

"These rodeo cowboys, they don't know a lot about horse racing, but I rode racehorses for 35 years, and I rode some of the greatest horses that have ever won on a racetrack," Carter said. "It was extremely good to me."

In his storied racing career, Carter won $80 million on the horses he jockeyed, but he has the same mentality towards team roping now as he had towards his sport then.

"You get out what you put into it," Carter said. "Just as you do in any sport."

Malcom Davis, a mutual friend of the champions, originally made the introduction.

"I asked Malcom who GR was," Colby laughed. "When he told me, %u2018the jockey,' I thought, well I've never seen a jockey rope before but let's try it."

The first time they roped together Colby missed the first steer, and he felt terrible.

"By the time we got back around GR had me so pumped up I was ready to go back at it again," Colby recalled. "For the better half of the year, I worked so hard. I wanted to rope with him somewhere because he had such a positive influence on me. Last year, about a month before the Finals, he called me and said, %u2018Mike, one of my partners fell through. You have been pestering me, do you want to rope in the # 9.5 Legends?'"

Carter and Colby had a shot at the #9.5 Legends title at the 2020 USTRC National Finals in Fort Worth but came up just short with a second-place finish. As Ricky Bobby would say, "If you're not first, you're last," and they wanted a re-match.

Fast-forward to 2021 and the Oklahoma team had a chance to redeem themselves and this time they earned their bragging rights.

"We seem to rope best in our age category," Colby laughed, proud of their new No. 1 title.