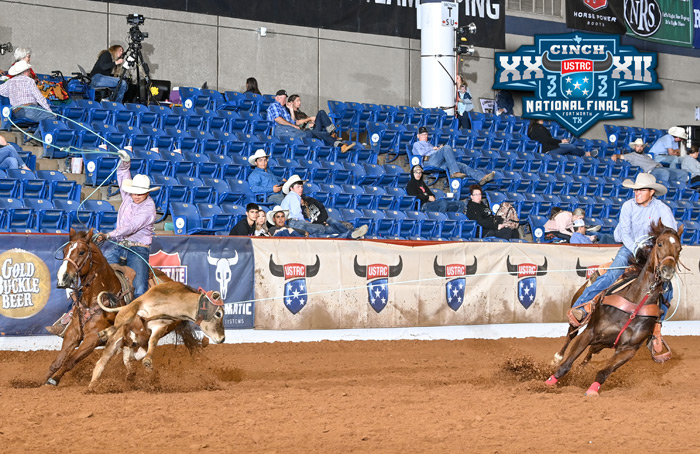 Todacheenie and Lansing Bring Home $50K in the #13.5 Shootout

The #13.5 boasts a large number of teams with high numbered ropers, resulting in a challenging division with a big payout, and it always requires extreme mental prowess down to the wire. When Todacheenie and Lansing rode in at third high call the fourteenth callback was still sitting number one, but the team had a game plan.

"I told myself we've got to be a seven right here, I have to throw it," Todacheenie said.

"I knew he would do his job and all I'd have to do is clean it up," Lansing added. "My game plan on that one was to ride high and kind of step over. I wanted everything to happen out before my eyes and then I would go in. I wasn't planning on going that fast."

Lansing, 19, is currently attending Casper College in Casper, Wyoming, where he's competing on the rodeo team for five-time NFR team roping qualifier and million-dollar career earner, Jhett Johnson. He and partner, Wheaton Williams, are currently sitting fourth in the Rocky Mountain Region in a tight race. He'll head back from Fort Worth to try and secure a spot at the CNFR. Lansing rides a 12-year-old gelding that came from J.D. Yates as a 5-year-old. Registered Red Tag Olena they call him "Red."

Todacheenie, 22, has his CDL, is a welder and farrier by trade, and ropes at every opportunity, whether it's at a jackpot or a rodeo. Todacheenie was riding a 4-year-old chestnut mare registered Herman Cat Attack that he calls "KC." Todacheenie and his brother Jaken - who also placed in the #13.5 Shootout - started the mare as a ranch horse and went to roping on her as a 3-year-old.

"I bought her as a 2-year-old," he said. "She's special for sure. She's real quiet and pretty soft so I just try and stay light on her and she just does her thing."