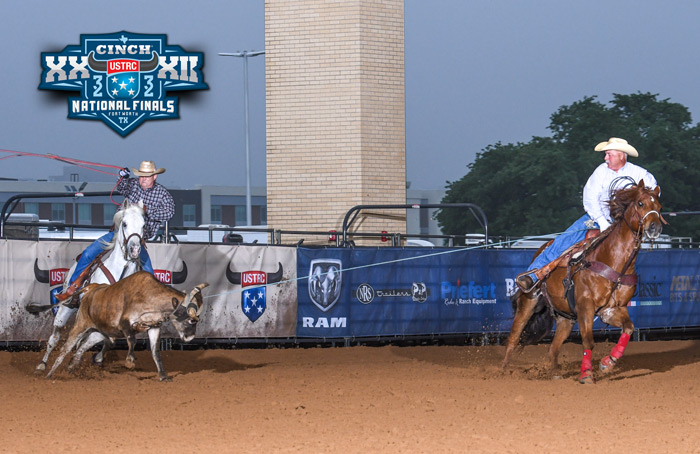 
The draw team of Greg Mahaney, of Saint James, Missouri, and Brick Roberts, of, Odessa, Texas, had fate on their side when they won the #8.5 Legends at the Cinch USTRC National Finals XXXII roping four steers in 40.68 seconds, worth $21,000.

"We'd never met until we were riding in the box," said Mahaney, who had quit roping for several years to get both of his shoulders repaired. "I want to thank my good friends the Martins for coaxing me back into it."

Now, just 35 weeks away from his second retirement as a superintendent, Mahaney plans to continue down the jackpot trail with gusto.

"I retired once and went back to work," said Mahaney. "I have my own roping steers grazing in the pasture now. This time we're going to play."

Roberts had his own hiatus from the arena after he was diagnosed with stage three colon cancer in 2010.

"I'm very fortunate to get to come back and rope," Roberts said. "That's a scary deal. It really sobers you up to the important things in life. After the chemo and radiation, I just wanted to get back to work and make a living for my family. My son said one day, %u2018You used to love to rope.' I thought about it, and I went and bought me a really nice horse and I've been going at it ever since. I'm just blessed to overcome that experience."

Both Mahaney and Roberts agree it's the competition and camaraderie that keep them addicted to the sport.

"I've made some good friends I'll have the rest of my life," Roberts said. "I made a new one today. Life is so short. How many guys 60 years old can do this? Sometimes I don't know how I do, but I made it today."